Home » Uncategorized » Patience and the horse

Patience and the horse

Today I had a lesson in Patience.  We always talk about Patience, and how its important to be patient with your horse.  Give your horse time to learn, time to understand what you want.  Most of us probably feel that we do exactly that. Patient  At least most of the time. 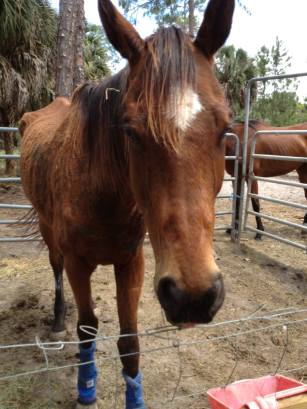 Chevy when he came here 3 years ago

I was out in the pasture w Phoenix, Ruby, and Chevy.  Phoenix and Ruby are relatively new to the rescue, Chevy has been here almost 3 years.  I can fill you in on his story later, but long story short he came here emaciated, body scale of 1 and almost died.  He had a twisted intestine causing severe colic over a period of months, abscesses in two of this 4 feet, coffin bone infection, rain rot, scratches, covered in bite and kick marks, a keratoma (benign tumor in the hoof)  old broken hip, the start of kissing spine disease, and arthritis.  Wow, just reading that gives you an idea of how sick he really was.  It took us a while to find out all the things that were wrong with him.  He had many health crises.  It was heart wrenching to see him progress slowly, getting better, only to have yet another  horrible colic episode( due to his twisted intestine).  Friends whispered maybe it was time to let him go… And that was almost what happened..

I spent a lot of time with him, trying to lend him my energy.  Talking to him, trying to listen to him, but he had nothing to say. Not a single thing.   He was completely shut down for his first 6 months here.  Emotionally he had checked out long ago.  But I just kept at him.  And I kept on…  But there were many a nights, that I slept in a chair right next to him, or on the lanai, setting my alarm to wake up every hour or two to check on him. Many a tear shed, for my inability to help him heal from the abuse he has suffered.

So over the years as his recovery has progressed, I have cared for him, he has come to rely on me.  He usually approaches me when he wants something. I fix things for him.  It might be that he needs a scratch on a hard to reach place, maybe a horse has gone in his feeding pen at dinner time, Chevy will come to me and alert me so I can chase off the infiltrator  Still hungry and wanting a big bunch of special hay for lunch?  Over he comes and gives me “the look”  That sort of thing.

So today, as I sit in the paddock with all three horses, he walks over.  I am sitting on the tack box, the sun is setting, and I am just relaxing. He comes over, towering above me, and just stands there looking at me.  Hanging his head, but looking at me.  Its been a wonderful, but long day for me, I don’t feel like getting up.  I want to sit and relax.  Notice that this is my first mistake, ( I assumed he wanted something ).  I sat for a while, and he stayed right there. Normally if he doesn’t get what he wants, he simply leaves. But tonight he stayed right there.

Looking at me and then glancing away, then looking at me again, I noticed how soft his eyes were.  I started to pay more attention and noticed how soft his whole face had become, his eyes, his ears, his entire face had changed.  Then it hit me, he was saying Thank you.  At least that is the human translation.  He was acknowledging me.  After three years together and totally out of the blue.  My immediate reaction was Wow, where did that come from, and then my second thought was,  how I had easily misinterpreted his intentions.   He had been waiting for me to understand him for 10 minutes.  He stood there patiently, continuing to tell me how he felt. And he waited until I got it.  Once I understood, he licked and chewed and then wandered back to the his hay.  No big deal..

He left me totally stunned, not only with what he was feeling, but also , he waited 10 minutes for me, not giving up, until he was sure I knew.   How long would I wait for him to understand what I say, every day?  It was a good lesson for me.  I felt like I was in touch with him, yet here he was, and instead of listening to him, I was assuming I knew what he wanted, so I was not listening, not really….  And I can say Thank you to ALL the horses who teach me to be a better horsewoman. For them to teach you, you do have to listen. And if you can’t understand them, maybe you just need to listen a little longer…

By Track to Trail Thoroughbreds in Uncategorized on February 15, 2016.
← Who’s Sleeping with Who? Who is Sleeping With Who Episode 2 →